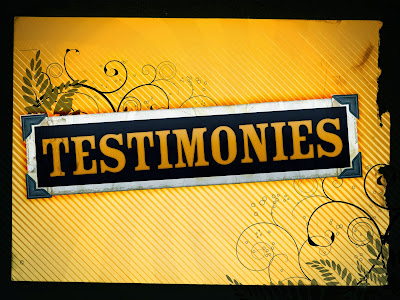 It's a wonderful Sunday morning and today again I will share share a spirituality post. While stepping out this morning, I noticed a Living Faith Church (Winners'Chapel) flyer on the floor, so I decided to pick it up to read. I always like to salvage gospel tracts on my way, I believe there is a seed of change in it- God's nonperishable word. You might want to pick up a tract from wasting too, it could save another reader's life.
So I picked up this tract/flyer that was an invitation to a programme- Convenant day of Prosperity and I decided to read, Lo and behold I was blessed by 4 wonderful testimonies.These testimonies like many others rekindle my faith in Testimonies. A testimony is like a key that unlocks our faith to receive all that God has in stock for us in a peculiar situation if God has done it for somebody he can do it for you too.Just believe and trust God
While it might not be convenient to share the exact testimonies I read from the flyer, This morning I will share some amazing testimonies from a couple of online sources; majorly RCCG Holy Ghost Service Testimony and Winners Chapel Abeokuta Testimonies (please see the sources after the post)


MIRACLE JOB
I've been born again and committed to the church I attend since 1991. Since then, I've been hearing about Living Faith but I've never heard Bishop Oyedepo's teaching or read any of his books. 31st of December, 2012 someone invited me here and I had the opportunity to listen to the Bishop's message. He spoke about blessings that lead to breakthrough, talking about parental blessings, priestly blessings among others. In January 2013, we became redundant where I work. My boss called me and said he was going to give me a 2-month contract (between February and March) which he might decide to renew or not at the end of March. Papa prophesied that the year 2013 shall be for us a year of divine surprises, next levels and miracle jobs. Therefore, any time I pray, I declare and echo those words. I got into the organization as an Account Officer, even though I read Marketing and I'm majorly a field person. I rose to the position of Administrative Officer where God prepared me for a better placement. Just 2 weeks ago, I got a job as a Human Resources Manager for a Lebanese company. To God be all the glory.
DENNIS

PREFERRED ABOVE 18 OTHER PEOPLE
Sometimes last year when I was transferred from Lagos to Ilorin, I didn't know God had something in store for me. On my arrival in Ilorin, there was a proposal at my office and about 18 of us were eligible for the position because we wore the same rank in the office. About 2 weeks ago, when God's servant in the house was preaching and was coming towards me, I said within me “how can I touch his clothes”, as he got to where I was seated, he touched me himself and I said “Yes, everything is settled”. When I got back to my station, out of 18 of us eligible for the position, I was picked to head that office. Secondly when I was in Lagos, about 4 of us were given houses (3-Bedrooms flat) in Abuja and we were asked to pay up for the houses. My wife and I got money and paid for the house. Before Shiloh, nobody was occupying the house but during Shiloh, I told God I want somebody there by Christmas. Immediately after Shiloh, I called my friend that is in charge of the house and asked about the place, he said the place has been occupied. Thirdly, last Monday God added another year to me; I return all the glory to Him.
OYEDEJI S. S.


BREAKTHROUGH JOB
AHANOR IZUWA Period: March, 2012
I became a Covenant Partner of Daddy GO in March 2012. At that time, I was earning less than 25,000 Monthly.

In May 2012, I got a call from a a company I had long applied to and had almost given up the hope that they would ever call me. They asked me to resume immediately in July with a salary more than 20X my previous salary.


SIS BUKOLA SUNMOLA Period: April, 2013
I greatly bless the name of the living God of heaven, the ancient of days, the omniscient one, the only one who hears and answers prayers, unquestionable God of heaven all glory, honor power and adoration be unto His exalted name. in 2003 I traveled to the UK and had a baby but unexpectedly I went home (Nigeria) in 2005 and didn't get a visa to go back the UK whilst my husband was still there. I tried several avenues to get babut all failed. I was estranged from my husband for almost 4 years and u can imagine the shame from people and family. my hubby came home 2008 d I had our 3rd child 2009. he later traveled again 2010 and I was left alone with 3 kids. in 2011 January I and my children tried UK work permit again and we were denied after paying 750, 000 naira. 2010 congress I was at redeem camp to pray for the visa success, I went with our passports and touched the alter with it praying and sobbing. I continued in prayers despite the disappointment and in 2012 may I won the visa lottery, I couldn't believe it, I have never won anything in my life. people of God i am a living testimony that after 8 years of failure separation, shame heartache I my children and my hubby are now safely in the USA to the glory of almighty God. praise the name of the Lord who can turn captivity around.
new Jersey, United States


PASTOR KING OLUWAMAYOWA ADEWUNMI Period: April, 2013
I thank God for the salvation of my soul. Daddy GO came to Kenya last year for 2012 East Africa Regional Convention and prayed for peaceful election in Kenya. The election was held in March 2013 and it was peaceful contrary to expectations of many people, when the result was declared, there was also peace in the country. Also a word of knowledge came during March 2013 SHGS that someone's health will surprise the doctor which l claimed, l went for cardiac-echo the following week based on referral by doctor, and when the result came out the Cardiologist said the result was normal and no cause for alarm. I took the result to the doctor and said it was a surprise. My breathing and blood pressure have been normal and doing what l could not do before since then. Praise the Lord Somebody!
Nairobi, Kenya

SOURCES: These testimonies were selected in no definite order from the two sites:

BOOK OF THE WEEK