MOVIE REVIEW: LESSONS FROM BEING MRS ELLIOT
A particular day in September last year, I was at the cinema with my Special One, to see a movie but fortunately, it started before we got there, so we chose to see a new Nigerian movie and I must say we did not regret seeing the movie. It was so interesting that we reviewed lessons from the movie together. So reaching to my my archive I share in brief lessons from Being Mrs Elliot starring and co-produced by Omoni Oboli. 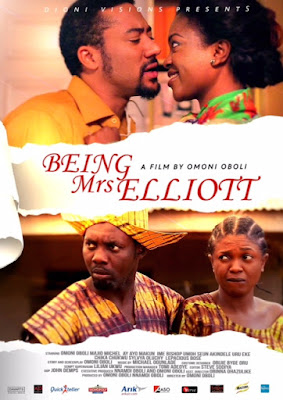 1. Conflict in personalities and unresolved differences will always affect the relationship later on. We see this from what happened to Lara and Bill’s marriage.

2. Money cannot buy love, a loving relationship is solely built on deep understanding, maturity and patience e.g Isawuru was patient with Lara- who was to him Angelica, to come to terms with the situation and start seeing his love for her.

3. Friendship and family relationship: The types of friends you keep, affect the quality of opinions you receive and in turn decisions made or actions taken. Lara was always taking wrong decisions based on the wrong advise received from her friends.

4. Dreams indeed come true: Dreams always come to pass or to reality. Be careful the kind of dreams you have and the people you share your dreams with. Isawuru’s dream of a beautiful wife out of the blue came to pass- perhaps one of the fantasies from Nollywood- but life itself can be full of a handful of surprises.

5. Truth delayed or concealed is dangerous as a time bomb: It’s always good to share any withheld truth, the earlier it’s done the better. Fisayo chose to play the role thrust on her rather than opening up on time on her true identity even after the plastic surgery imposed and done on her.

8. Law of Karma. If you sow evil, be ready to reap evil and if you sow good seeds you reap the good harvest. The Senator got paid in his coins for killing Fisayo’s boyfriend.
Once again I kudos to the producers of this movie Being Mrs Elliot, it’s another nice one from Nollywood.