THE NATURE OF THE BOX 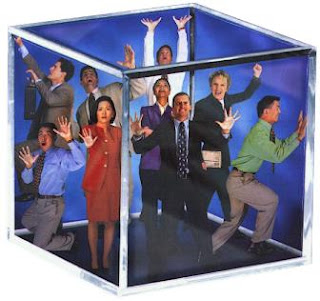 My thought about the box has led me to write more about this topic and in the process I set out to find answers to the questions posed earlier in our earlier post.The basis for these questions is the cliche,'thinking outside the box'. The important question here is 'What is the nature of the box?'


The box is anything that limits or reduce our natural flow or expression..It is any lid on the total expression of our creativity, in other words, it could be an object out of our imaginations,it might be the object of our fears

More often than not,this limitation is one that has been placed by the society or the cultural environment in which we find ourselves, no matter how it appears the box is a dream killer.


So what is the content of the box and of what stuff is it made of? The content of the box isn't of much difference form its nature ,the box has in myriads of reasons not to take the first leap in the right direction,it is full of reasons for not getting things done right away and enough excuse to procrastinate. Also found inside this box are the set norms which define our very existence and unhealthy ways of thinking which has blighted our views...

We may now begin to think about the location of the box...Its location is not hidden and its dimension not confusing for we are the ones who determine the length, breadth and width of the box which blanks our minds from possibility thinking.

Till we meet again,I will like to read your comments on the subject of the box...

It's a great day! I am pleasured today to write expressly on a multidimensional subject. Just as by looking through a prism we can begin to see different reflections of the same source of light. So also in this discussion we will see a trend leading to another.


On my short 'get -away' to my country home in Western Nigeria, I kept thinking about 'the box' and the popular catchy statement "Thinking outside the box!". This is my reflection on 'the box' and it is meant to be a collective discussion thread,your views are clearly welcome. I believe we all see things from different perspectives and when we share from different angles we get the best of all sides.

I pondered on the nature of this 'box' and I know there is more to the cliche 'Thinking outside the box' so i began to raise a lot of questions. I believe the school of thought which says to arrive at the right answers we must first be able to ask the right questions.Questions open for us an expansive line of thought.

So I began to ask, what is the nature of the box?

Where is the box?

Why is there much-ado about the box?

Who owns the box ?

And what can be done with the box?

What are your views about the cliche 'thinking outside the box'. I welcome your comments on these till we meet again!

HOTTEST SECRET REVEALED!!!-A PRACTICAL GUIDE TO YOUR FINANCIAL FREEDOM EARN LEGAL INCOME ONLINE THROUGH QSP! Quick Smart Programme is an online marketing programme which takes you by the hand and shows you how to make legal internet cash.It's sure,safe and legal. Send a blank mail to empowerment.ng@gmail.com for instant free report.
Posted by Emmanuel Ayeni at 11/17/2012 09:47:00 PM No comments:

As the whole world stood at attention as America decided who won race to the white house yesterday,I have taken it up to share the good news of the winner of the presidential election. I feature a report by Yahoo News' Liz Goodwin Enjoy! 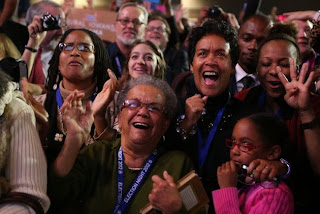 President Barack Obama handily defeated Gov. Mitt Romney and won himself a second term Tuesday after a bitter and historically expensive race that was primarily fought in just a handful of battleground states. Obama beat Romney after nabbing almost every one of the crucial battleground states.

Romney conceded in Boston in a heartfelt speech early Wednesday morning, at 1:00 AM ET. "Like so many of you, Paul [Ryan] and I have left everything on the field. We have given our all to this campaign," he said. "I so wish that I had been able to fulfill your hopes to lead your country in another direction." Romney congratulated the president and his campaign on their victory.

The Romney campaign's last-ditch attempt to put blue-leaning Midwestern swing states in play failed as Obama's Midwestern firewall sent the president back to the White House for four more years. Obama picked up the swing states of New Hampshire, Michigan, New Mexico, Iowa, Virginia, Wisconsin, Colorado, Nevada, Pennsylvania, Minnesota, and Ohio. Of the swing states, Romney only picked up North Carolina. Florida is still too close to call, but even if Romney won the state, Obama still handily beats him in the Electoral College vote. The popular vote will most likely be much narrower than the president's decisive Electoral College victory.

The Romney campaign cast the election as a referendum on Obama's economic policies, frequently comparing him to former President Jimmy Carter and asking voters the Reagan-esque question of whether they are better off than they were four years ago. But the Obama campaign pushed back on the referendum framing, blanketing key states such as Ohio early on with ads painting him as a multimillionaire more concerned with profits than people. The Obama campaign also aggressively attacked Romney on reproductive rights issues, tying Romney to a handful of Republican candidates who made controversial comments about rape and abortion.

These ads were one reason Romney faced a steep likeability problem for most of the race, until his expert performance at the first presidential debate in Denver in October. After that debate, and a near universal panning of Obama's performance, Romney caught up with Obama in national polls, and almost closed his favoribility gap with the president. In polls, voters consistently gave him an edge over Obama on who would handle the economy better and create more jobs, even as they rated Obama higher on caring about the middle class.

But the president's Midwestern firewall--and the campaign's impressive grassroots operation--carried him through. Ohio tends to vote a bit more Republican than the nation as a whole, but Obama was able to stave off that trend and hold an edge there over Romney, perhaps due to the president's support of the auto bailout three years ago. Romney and his running mate Paul Ryan all but moved to Ohio in the last weeks of the campaign, trying and ultimately failing to erase Obama's lead there.

A shrinking electoral battleground this year meant that only 14 states were really seen as in play, and both candidates spent most of their time and money there. Though national polls showed the two candidates in a dead heat, Obama consistently held a lead in the states that mattered. That, and his campaign's much-touted get out the vote efforts and overall ground game, may be what pushed Obama over the finish line.

Now, Obama heads back to office facing what will most likely be bitterly partisan negotiations over whether the Bush tax cuts should expire. The House will still be majority Republican, with Democrats maintaining their majority in the Senate.

The loss may provoke some soul searching in the Republican Party. This election was seen as a prime opportunity to unseat Obama, as polls showed Americans were unhappy with a sluggish economy, sky-high unemployment, and a health care reform bill that remained widely unpopular. Romney took hardline positions on immigration, federal spending, and taxes during the long Republican primary when he faced multiple challenges from the right. He later shifted to the center in tone on many of those issues, but it's possible the primary painted him into a too-conservative corner to appeal to moderates during the general election. The candidate also at times seemed unable to effectively counter Democratic attacks on his business experience and personal wealth.

HOTTEST SECRET REVEALED!!!-A PRACTICAL GUIDE TO YOUR FINANCIAL FREEDOM EARN LEGAL INCOME ONLINE THROUGH QSP! Quick Smart Programme is an online marketing programme which takes you by the hand and shows you how to make legal internet cash.It's sure,safe and legal. Send a blank mail to empowerment.ng@gmail.com for instant free report.
Posted by Emmanuel Ayeni at 11/07/2012 08:02:00 AM No comments:

MY PRAYER FOR YOU 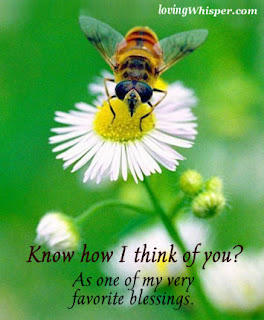 TODAY I CHOOSE TO SPEAK THE BLESSING!

Great greetings to all my friends and my various readers from all around the globe. It's a new month and as such, I want to wish you all a HAPPY NEW MONTH! However, I want to share positive words affirmations which I call BLESSINGS with you.I believe words are great seeds.I am not going to speak or write on the power of affirmations today but I will go ahead to bless you with positive words and prayers and I pray that this will find fulfillment in your lives this month and the rest of the month in the name of JESUS!

Today i choose to look and choose to see differently!

I see your peace increase and flow like a river today!

I see Hope for you now and in the future

I see your greatness break forth and emerge like a new horizon!

I SEE A NEW YOU EMERGING

Friend,I choose to speak the positive for you today.

I speak the seeds of prayers to my numerous friends today ,


This month IN THE NAME ABOVE EVERY OTHER NAME

YOU WILL GATHER MOMENTUM

YOU WILL EXPERIENCE A PUSH FORWARD

GOD WILL DO IT

YOU WILL GAIN SPEED

YOUR DREAMS WILL SPEAK AGAIN

YOU WILL MAKE PROFIT

YOU WILL BE REMEMBERED

YOUR LIMITS ARE BROKEN OFF

YOU WILL DWELL IN SAFETY

YOU WILL ENTER THE REST

GOD WILL GIVE YOU THE BEST OF THE LAND

YOU WILL ACHIEVE UNCOMMON GREATNESS

YOU WILL WALK IN THE BLESSING

YOU WILL WALK INTO UNCOMMON HARVEST

YOU WILL BE EMPOWERED TO EMPOWER

YOU WILL BECOME A BLESSING

YOU WILL ENJOY THE SUPERNATURAL

YOU WILL FIND LOVE AGAIN

YOU WILL BE LIFTED

YOUR TESTIMONIES WILL NOT BE DESTROYED

IT'S TIME FOR YOUR ELEVATION

HOTTEST SECRET REVEALED!!!-A PRACTICAL GUIDE TO YOUR FINANCIAL FREEDOM EARN LEGAL INCOME ONLINE THROUGH QSP! Quick Smart Programme is an online marketing programme which takes you by the hand and shows you how to make legal internet cash.It's sure,safe and legal. Send a blank mail to empowerment.ng@gmail.com for instant free report.
Posted by Emmanuel Ayeni at 11/01/2012 11:38:00 AM No comments: