UNDERSTANDING THE GENESIS OF GREATNESS 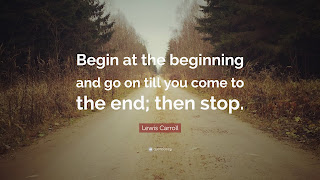 UNDERSTANDING THE GENESIS OF GREATNESS

Begin at the Beginning…


In the journey to greatness and excellence , you must understand that nothing starts without a certain beginning. Everything always stems out from a Genesis. Even the heavens and earth were created from a formless and void nature. So also, every person, institution , process or existing phenomenon always has an identified beginning, initiation point and origin. The saying ‘better is the end of a thing than the beginning’ reiterates the fact that everything has a beginning.


Everyone has an origin or  starting point , the beginning of a line is a point, the beginning of a full grown man is an embryo and a tiny drop of water is the genesis of a mighty ocean.
No matter how big or great a thing may be, it always has its origin from a definite point.


Yo r journey to greatness must start from a set point and a good understanding of the beginning keeps you in good stance and projects you in good stead for a wonderful take- off for a good landing in your quest for greatness.


Be that as it may, the beginning may  be characterized by a certain level of voidness, emptiness or formlessness.


The starting point could seem somewhat insignificant or appear to be rather nebulous or uncertain , however, no matter its first appearance, there is actually more to the beginning than it seems.


The formlessness of a great beginning calls for a new and futuristic view of things, the voidness associated with beginning of the process demands a release of creativity and a sense of innovation, it reveals the need for a new vista .


Thus, every beginning presents a vacuum which is only filled by the creation of a new order of things, new values and taking of decisive steps or actions.


Everything great has a beginning and this is associated with a certain level of formlessness and seemly uncertainty, hence the need for creation of a new sight this could take the shape of new values, new systems,products, brands, income stream and anything that bring about a well defined vista on which greater achievements can thrive.


Never be afraid to start from the scratch, the very beginning, every great building has a foundation , which once faulty renders an edifice prone to immediate collapse and dilapidation.


Go and achieve greatness in every way!

Email ThisBlogThis!Share to TwitterShare to FacebookShare to Pinterest
Labels: Beginning, Genesis of Greatness, greatness, How do I become Famous, How do I become great, How to be popular, How to hit it big, RISE TO GREATNESS, where do I start from
Newer Posts Older Posts Home
Subscribe to: Posts (Atom)