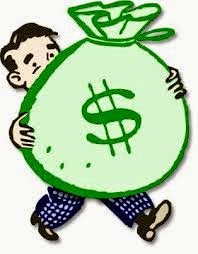 One day in the early part of this year i picked up my old smart phone and I decided to make another video on the 'money series' with the help of a colleague.  Although this video hasn’t gone live yet but I want to share a few thoughts on the subject matter contained or covered in it.
I once read a book by a rich British Entrepreneur as an undergraduate and holiday road side book store owner  titled  ‘How to get Rich’ by Felix Dennis , while I do  not guarantee the book will put some bucks in your pocket, but it does point to some invaluable thoughts on the subject of money, wealth creation and entrepreneurship. I share some of these tips from the book alongside some personal tips.
Money being  a medium  of exchange, is essential in any economy.(You may refer to my earlier post on money here) However, there are 7 ways of making money in any economy regardless of the geographic location, some of this ways will make you rich why some of them will not, I will cover ways rich people make money in another post.

1.       A  MAN MAY CHOOSE TO STEAL MONEY: It  is the illegal and most unethical way of making money.  The fact is some people make money by stealing from others, people steal in different ways and at different levels. From robbers to the executive that embezzles office funds to the politician that steals public funds these all make money from stealing and anyone who makes money from this way is called a thief or robber. Stealing money is not sustainable and is also degrading. The consequences of the illegal act of stealing is a jail term or death sentence as the case may be. Stealing itself is against the values of integrity and honesty that are instrumental to creating wealth, hence this in not an ethical and sustainable way.Why steal while there are better ways?
2.       YOU CAN WIN MONEY: One known way by which any one can make money is win it. People have won mind blowing amount from stakes at the lotteries but millions more have lost their fortunes to bookmakers. As much as you   can make money from gambling your results depends on your belief in luck or the unreasonable probabilities that mostly control the money game of chance.
3.       YOU CAN MARRY INTO MONEY: A man may marry into money, by marrying into a wealthy family a man may attain some levels of wealth or he might acquire some money based on his new status or relationship. This might be some of the reasons for
4.       YOU CAN INHERIT MONEY: If you have a rich uncle or wealthy relative who left you a great fortune, chances are that you might have been entitled to some of his wealth without even knowing it. Heirs of rich parents can make loads of money from their inherited estates.
5.       YOU CAN WORK FOR MONEY : This is making money by selling your time ,effort  or skills for money. International bestselling Author Robert Kiyosaki opined in his popular book Rich Dad, Poor Dad,  that “the poor  and the middle class work for money” he explained  truly  rich people have money work for them .  However working for money is a legal starting point for most people to earn money and according to financial analysts about 80% of the world make money this way.
6.       YOU CAN PRINT YOUR OWN MONEY: By this I mean you can set up a system of creating continuous flow of money like a cash machine. It has been proven that building your own successful business is a great way of making money in any economy, I will go into details in subsequent posts. This is how the mega-rich and wealthy make money and thus create enduring wealth.  I am teaming up with a group of financial experts at our company Avenues to Wealth to work with just 20 people within a period of 30 days to begin their journey to building a viable business system and thus embark on their journey to financial freedom, I will provide registration link at the end of the post.
7.       YOU CAN MAKE MONEY WORK FOR YOU: This is a corollary to  number 6. One interesting thing about money is not only can it be created, it can and also has to multiply. In George Clason’s Richest man in Babylon Arkad revealed the need for your gold to work for you and its children’s children work hard for you. This is one other way to make money and here is the play ground of the rich and wealthy.

I believe this piece has done a bit in laying more foundations on some essential aspects of financial intelligence with regards to wealth creation.  Join myself and my   team at Avenues to Wealth we work closely with 20 people who are ready to increase their financial intelligence, make extra monthly income of about $1000 or more, secure your space at the link. http://bit.ly/VqbOgh