MY STORY: I LOVE MY BIBLE 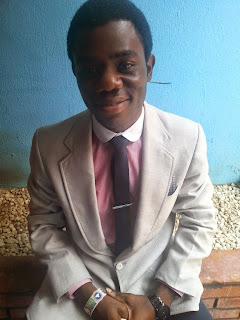 I have always had a resolve to read the Bible through each year, In fact over the past 7 years I have had this goal, However, no matter how much i tried, it's always been like a tall dream, as I always had to try or start all over again every year. However, this year I have a stronger resolve to do 'a bit' daily to get that done.


I sincerely believe that God's word can change my world, that is why the devil will stop at nothing to ensure i read less of God's word. What about you?

The Bible is a special book for me. I am not clouded by any religious ritual of whatever form.Nope! I refuse to. I was introduced to the world of reading almost right on time; about my 8th or 9th birthday even despite my peculiar background ... (I still feel that was A LITTLE late though)- i think its great when kids are taught to read earlier. Out of the stories and books I read growing up or that i presently read, none has been of so much impact on me like the Bible. The Words in it are powerful enough to draw me to its Author and it still does, the words in it were powerful to strip me of every bad habits, and all juvenile delinquencies.This was where I saw the need for a personal relationship with God through Jesus Christ, in that old flamingo-leather-bound *Yoruba Bible at my parent's then, rented old two-room apartment somewhere in Osogbo (a town in western Nigeria, West Africa).

God's word is food to our spirit man and map or compass to help our journey from earth to eternity. It is God's love letter to humanity.

I sincerely believe that God's word can change my world, that is why the devil will stop at nothing to ensure i read less of God's word. What about you? John Bunyan was right 'This BOOK will take you away from sin or sin will take you away from this BOOK' I LOVE MY BIBLE. I will go on to reward myself with a French Bible this year once i am able to read the Bible through... I am currently on a 90 day plan but i am tons of chapters and many days behind schedule...So I am taking a every good step in following through by tracking it weekly and being accountable with every one on my blog and perhaps in any possible place.Perhaps if it's not achieved in a a single 90 day plan it would be achieved in two 90 day plans.

The fact that Bibles are very wonderful versions and formats soft or electronic copies make reading better and better.

I am presently wrapping up the book of Numbers and by weekend I hope I am out of Deuteronomy and by next weekly update on my Bible reading I hope I am closer to the new testament .... wow! that's just so much discipline needed here! I will appreciate your comments on different personal experiences in reading the Bible through.

I am Your Billion-dollar friend,


OWN YOUR LIFE AND CREATE YOUR DREAM LIFESTYLE

Memorise: And I will restore to you the years that the locust hath eaten, the cankerworm, and the caterpiller, and the palmerworm, my great army which I sent among you. - Joel 2:25

1 And the sons of the prophets said unto Elisha, Behold now, the place where we dwell with thee is too strait for us.

2 Let us go, we pray thee, unto Jordan, and take thence every man a beam, and let us make us a place there, where we may dwell. And he answered, Go ye.

3 And one said, Be content, I pray thee, and go with thy servants. And he answered, I will go.

4 So he went with them. And when they came to Jordan, they cut down wood.

5 But as one was felling a beam, the axe head fell into the water: and he cried, and said, Alas, master! for it was borrowed.

6 And the man of God said, Where fell it? And he shewed him the place. And he cut down a stick, and cast it in thither; and the iron did swim.

7 Therefore said he, Take it up to thee. And he put out his hand, and took it.

In our Scripture reading today, we see someone felling a tree by the riverside and the axe head been used falling into River Jordan. Thank God for His power that located the axe head and brought it back up for the user to complete his project. There are people who have lost very precious things in their lives. With God, there is nothing lost that cannot be recovered miraculously. To recover means to find something you once lost. There are people who have suffered partial loss and there others who have suffered total loss. No matter the type of loss you have suffered, The Almighty God will restore them to you in Jesus' Name. In Mark 5:25-34, the woman with issue of blood lost a lot. She lost her health because she had been in that situation for long. She lost her wealth because she had spent all she had, trying to get help from physicians. She lost her peace because when there is absence of good health and wealth, frustration can set in and this leads to depression. But by the time she met Jesus, everything she had lost was restored back to her. For a user of this devotional, whatever good thing you have lost will be recovered instantly in Jesus' Name.

Samson is an example of someone who suffered partial loss (Judge 16:21-27). As a result of his carelessness, he lost his eyes to the enemy. Even though his hair grew back, blindness remained in his life. By that Name that is above every other name, which is Jesus, every reminder of lost in your life is terminated in Jesus'Name. Everything you have lost; financially, physically, in your marriage and career-wise shall be fully recovered in Jesus' Name. Another interesting story that shows God's ability to return whatever one has lost is found in Daniel 4:28-37. It is a story about King Nebuchadnezzar. This king became so proud that he refused to acknowledge God as source of his achievements. In a bid to humble him and teach him that man cannot achieve anything without God, God caused him to lose his kingdom. He also suffered the loss of sanity, humanity, dignity, glory and honour. In fact, for a period of 7 years, he was not different from animals. Miraculously though, all through those years of his wilderness experience, nobody replaced him on the throne. The Lord kept his position intact until his training was over. Testimonies abound to show the fact than an opportunity was lost does not mean it cannot be regained. As long as God is in the equation. He can reverse the irreversible. He can suspend law and principles to make a point in your life. That is why those who think they have seen your end are in for a shocker. It is important that we always appreciate what we have so that we don't lose it. If you have lost your peace of mind due to backsliding, you have to repent of those sins and confess the Lordship of Jesus. If you do these, you will become a new person and experience the time of refreshing from the Almighty God.

Prayer Point: Father, by your mercy, command a recovery of all I have lost in Jesus'Name.