LESSONS FROM A MOVIE : THE KINGSMAN: THE SECRET SERVICE 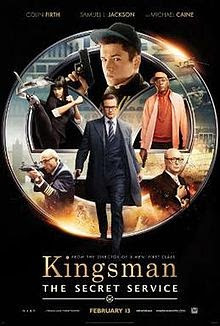 MOVIE: THE KINGSMAN: THE SECRET SERVICE
I haven’t published movie reviews in a long while on this blog but I have done a couple of some and I will actually use Saturdays from now as an official day for movie reviews. It’s now official! 
Now there had been so much buzz about 50 shades of grey, while I haven’t read the novel i thought we could actually see the movie, but it was stated for a later time and I had read later on how it was banned in Nigerian Cinemas being an erotic movie...I thought there had been much hype about it already, so why wouldn’t the producers make something much more worthwhile for the public..
LESSONS FROM KINGSMAN: SECRET SERVICE
“First of all, here is a short synopsis form IMDB.com
Gary "Eggsy" Unwin (Taron Egerton), whose late father secretly worked for a spy organization, lives in a South London housing estate and seems headed for a life behind bars. However, dapper agent Harry Hart (Colin Firth) recognizes potential in the youth and recruits him to be a trainee in the secret service. Meanwhile, villainous Richmond Valentine (Samuel L. Jackson) launches a diabolical plan to solve the problem of climate change via a worldwide killing spree.
Initial release: December 13, 2014
Director: Matthew Vaughn
Running time: 129 minutes
Music composed by: Henry Jackman, Matthew Margeson
Screenplay: Jane Goldman, Matthew Vaughn “

I actually didn't know most of the characters except Samuel L. Jackson who acted as Valentine and he actually wasn’t my guy in the movie- He was the bad guy. I was drawn to the movie by the title and also it was the next movie in the time range we had to be at the cinema, and like most movies I have really learnt some lessons from, I didn’t watch it alone.... :)
My first lesson was at the opening, when the special squad was saved by the sacrifice of one of them who quickly defused or rather stopped a suicide bomber from blowing them all up, but at the expense of his own life. Here I learnt that great things will mostly start with a small sacrifice.
The first rule in achieving anything is always Team work. This second lesson was from the scene where the Kingsman organization, scheduled the first training for Eggsy and his other colleagues and they all were after their own survival until a girl got drowned.

The next lesson was when Harry although did not win in the final contest into the organization- because he wasn't going to shoot his dog, but he eventually went on to join a 3 man mission to save the entire planet...

Valentine’s death was a lesson in the power of positive over negative, no matter the extent of damage done; the good will always trumps the bad.
So I think the movie is a great movie.(if you agree say ‘aye!’)
If you have other lessons or views about the movie, I will appreciate if you share them in the comments section.
Cheers!
Emmanuel Ayeni
Your billion-dollar friend
www.emmanuelayeni.com

Join myself and our team at Avenues to Wealth as we work closely with 20 people who are ready to increase their financial intelligence, make extra monthly income of about $1000 or more, secure your space at the link. http://bit.ly/VqbOgh


OWN YOUR LIFE AND CREATE YOUR DREAM LIFESTYLE